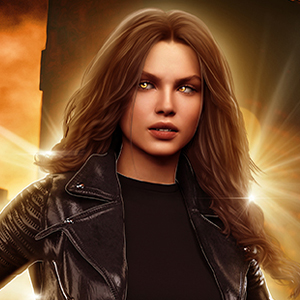 After a tumultuous entry into the supernatural world, being Changed into a werecat after a deadly car accident, Jacky thought she would figure it out. She had just lost her fiance in that fateful car accident, but Hasan was there for her. Patriarch of a powerful family, she was the youngest of his adopted children and they clicked immediately.

But a single lie snapped that fragile trust Jacky had in her new family and in him.

Now, she lives alone in Texas, owns a shitty little bar with a couple of pool tables, and wants everyone to leave her alone to her grief.

Jacky doesn't remember a large portion of her childhood.

Growing up: Jacky and her twin, Gwen, were born on a summer day. Their parents were excited to have two healthy baby girls.
However, as their personalities started to form, one child was more accepted than the other. Gwen was a people-pleaser. Jacky was righteous. Their parents made it clear who they preferred, especially when Jacky turned her righteousness at a problem they wanted her to ignore.
Every step of the way, even if Gwen and Jacky were equally skilled, they showered Gwen in praise while Jacky was ignored. If she was better than Gwen at something, their parents did everything they could to diminish her achievements.
There was only one thing in Jacky's mind that she was truly better than her sister at. Winning the crowd. Jacky was good at standing in front of a group and giving them a cause to fight for. It got her elected as Student Class President in High School.

College and Engagement: Jacky originally wanted to be a doctor, the life plan her parents set both her and Gwen on.

New Werecat: Jacky was Changed by Hasan, who became her adopted father that day.

K.N. BANET'S NEWSLETTER
Menu
This website and it’s content is the copyright and intellectual property of K.N. Banet. All Rights Reserved. 2019-2022